I woke up hungry, like any other day. Smashed the last cauliflower on the kitchen slab like a watermelon. What an idiot! If I cooked this piece of pale mush it would feed neither my palate nor my soul. As a non squished cauli, he was my good friend. A promise in the fridge that I wouldn’t have to spend the day alone as the only rotting organism in the house.

Asks its fake poverty
Does a dry mouth make sappy metaphors?
or does an athirst (could be) artist
pull pillars in its stomach — carved with
forlorn poetry. Intricate like the
florets of a fresh cauliflower

Ready to be plucked with attention
The poet and its friend

In the luxurious imagery of my poverty. I dive in the thought of what the life of an artist feels to be. I turn off the heater and let the dry air turn cold. Should I take a cold water shower? Since when do hungry people bathe, I think. My food pipe grunts in agreement. I delve further in this process of becoming. Flesh leaving veins, eyelids hanging on the eyes. Hunger encroaches my ribs and I wait for it to burst my chest open and make floral poems erupt from my body like mythical waterfalls. In my dizziness I see a field of cauliflowers firmly embedded in dark mud in the company of their own — cauli friends.

A funeral shall be planned

It(the poet) lies flat on the ground
in mourning, in acceptance
Past the cauli, hunger now its only friend
This one, it won’t let go or smack on the kitchen block

Still grieving, hunger clutches it
It hugs its beloved friend back
They wrap their mush mush cauli in its leaves
and throw him in a hot pan

Now edible, satiable
The cauli looks back
The poet must decide
between its two friends
- the cauli that would feed it and take hunger away
- the hunger that makes it the spectacular artist, I am

It chews on the ill seasoned, half cooked wraps
— still hungry, still the owner of a hollow fridge
Poet, still, as well 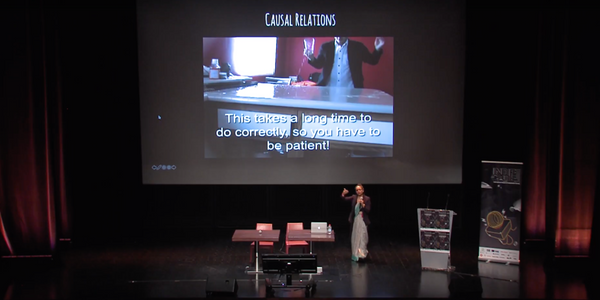 I was lucky enough to be invited to Indiecade Europe 2019 to present my work on how stage magic principles can be applied to games.

They assumed, We all had a window and we all had eyes to look at/through one. The place I reside, I have never come across a single window — a